Chula Vista is the second largest city in San Diego County California. In the Spanish language the words Chula Vista translate to Beautiful View. With the San Diego Bay on the western border and Otay Mountains to the eastern border the views are wonderful in either direction. 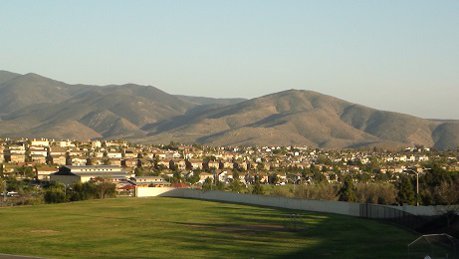 Otay Mountain is from the Kumeyaay Indian word meaning “otie” which means “brushy”. I’ve hiked up there a few times and the landscape is very brush like with small plants and tumble weeds. Otay Mountain has two lakes at its base, one is the Lower Otay Lake and the other is the much smaller Upper Otay Lake. The lower lake is can be fished on some days of the week although there is no swimming or waterskiing in either of the two Otay Lakes. New home communities and real estate tracts have crept very close to the Otay Lakes in neighborhoods like EastLake Vistas, EastLake Woods and Rolling Hills Ranch. Otay Mountain is the largest mountain in the San Ysidro Mountain chain and has an elevation of 3,566 ft. San Miguel Mountain is just north of Otay Mountain. 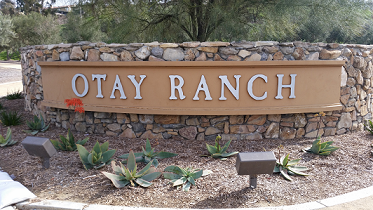 There are 3 United States Olympic Training Center campuses and Chula Vista has one of them. The other 2 are on Colorado and New York. The Chula Vista Facility which opened in June of 1995 is a year round, warm weather facility. It was a gift from the San Diego National Sports Training Foundation to the U.S. Olympic Committee. The Olympic Training Facility sits on 155 acre complex and has training for the following sports; cycling, archery, BMX, canoe and kayak, field hockey, rowing, rugby, beach volleyball, soccer, tennis, track and field, triathlon, and cross-training abilities for various winter sports. You can visit the site and take a tour – Chula Vista Olympic Training Center.

Chula Vista Beaches are non-existent but don’t worry you can easily get to and enjoy the beaches in Imperial Beach, Silver Strand and Coronado. Chula Vista does have a very nice Marina if you are interested in boating and keeping a boat of your own in the water. The Chula Vista Marina is located in the older part of the city at the very end of J Street. There are a couple of restaurants at the Marina as well and is a great place to have a stroll or spend a few hours. There are also some very nice views of Downtown San Diego and the sunset from this location.

The history of Chula Vista starts as early as 3,000 B.C. with Native Americans settling the area. The Kumeyaay tribe moved into the area much later and was living in the area when the Spaniards arrived in 1542. Juan Rodriguez Cabrillo the commander of 3 Spanish ships sailed into the San Diego Harbor and claimed the land for Spain. Chula Vista became part of the Rancho Del Rey meaning “The Kings Ranch” land grant in 1795 and the land was renamed Rancho de la Nacion years later. This is where the community of Rancho Del Rey in Chula Vista gets its name. After the Mexican-American War, California became part of the United States. The land grants that were already in place were allowed to continue as private property by the United States Government. 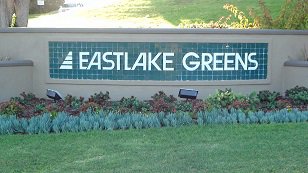 The first house that was built by the developer, San Diego Land and Town Company, was in 1887. They had purchased the land of the Rancho de la Nacion and began a 5,000 acre development. The Sweetwater Dam, built in 1888, helped Chula Vista become a farming community which at one time was the largest lemon growing area in the world.

If you are ready to buy a home in Chula Vista or get your home’s value then please contact us, we would love to help. We have more than 40 years combined experience to get the job done.

STUNNING!!! Property in Rolling Hills Ranch FOR SALE! READY TO MOVE IN, completely renovated with great finishes. 6 bedrooms, one of them downstairs with a full bathroom,...

This Move-In Ready Sunbow Home (no HOA Fees) is located in a Cul de Sac in a highly sought-after neighborhood near highly-rated schools, as well as parks, restaurants, sh...

This charming 3 bedroom, 2 bathroom home is located in the desirable neighborhood of Chula Vista with 1,164 square feet of living space and sits on a large lot of 7,527 s...

Fantastic two story Smart Home home on a cul-de-sac street with outstanding views and an inground gas heated salt water pool & spa in the backyard with views of city ligh...

Based on information from California Regional Multiple Listing Service, Inc. as of . This information is for your personal, non-commercial use and may not be used for any purpose other than to identify prospective properties you may be interested in purchasing. Display of MLS data is usually deemed reliable but is NOT guaranteed accurate by the MLS. Buyers are responsible for verifying the accuracy of all information and should investigate the data themselves or retain appropriate professionals. Information from sources other than the Listing Agent may have been included in the MLS data. Unless otherwise specified in writing, Broker/Agent has not and will not verify any information obtained from other sources. The Broker/Agent providing the information contained herein may or may not have been the Listing and/or Selling Agent.

Dawn was amazing and went above and beyond to find our family the perfect home. I highly recommend her she has a lot of experience in the industry and really listens to her clients needs.

Dawn excels in her craft because of her extensive knowledge in real estate and more importantly, her passion, commitment, and drive to helping her customers. I'm very impressed with Dawn's customer service and her genuine nature. Dawn is a true professional and displays those qualities by being sincere, honest, truthful, loyal, open, and candid. She listens first.....gives opinion second......takes action.......and continually repeats the cycle until you're at total satisfaction. It was a pleasure working with Dawn and would highly recommend her to my family, friends and anyone looking for a real estate guru.

Dawn is by far the best real estate professional I’ve had the pleasure of working with. Dawn brings a wealth of knowledge and expertise, but more importantly an ‘instinct’ that is very rare in the real estate business. Dawn has helped me buy and sell homes on multiple occasions, found investment opportunities, placed tenants, and drove an overall relationship where your best interests as a client are her top priorities. Dawn has a top-to-bottom understanding of the entire real estate business, and when finding a real estate professional you are hiring someone that you can trust to help you make decisions. Dawn helps you make these calls – and from personal experience she’s guided the best possible outcome in every real estate need I’ve had. I highly recommend working with Dawn Lewis if you have the opportunity. I’ve worked with dozens of others “top” agents in many markets and no one comes close to Dawn’s capabilities.

We cannot say enough great things about Dawn Lewis. Dawn went above and beyond our expectations. She always made us feel like we were her top priority, was quick to respond to emails, and clearly brought a wealth of knowledge to the process. Dawn also has an extremely helpful assistant, Jennifer who made sure that we were taken care of throughout the buying process. Dawn even helped us out after we purchased our home with issues that were unrelated to her. She will be our real estate agent for years and years to come. Would highly recommend to friends & family in a heartbeat.

I purchased a condo that Dawn helped me find - completing the entire purchase online. This was an investment for my granddaughter to live in while going to school. I shipped furniture to furnish this two bedroom condo in a pod. Dawn and her staff supervised the delivery and unloading and arranged for someone to unpack and put everything in its place including hanging pictures and making beds. Dawn and her staff also assisted in a short term rental until my granddaughter arrived. Throughout the time we worked together she was always pleasant, cooperative, competent, and knowledgeable. I would recommend her wholeheartedly to anyone who selling or buying in the San Diego area.